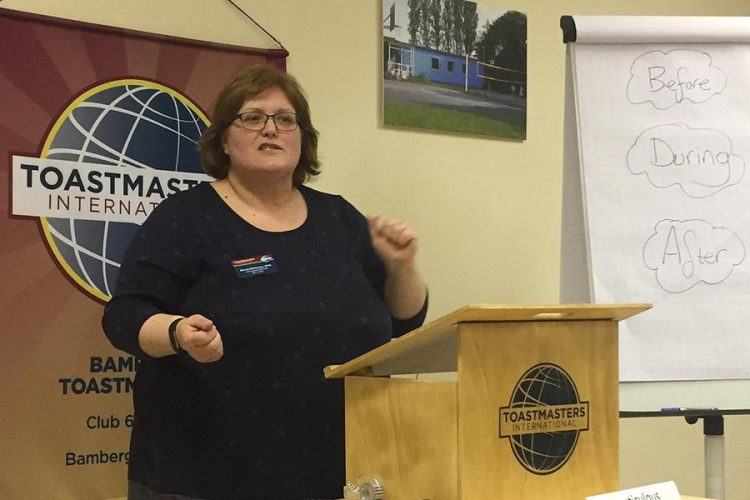 In a very inspiring meeting last night we were entertained by our first-time toastmaster Michael and his chosen motto “Fun with Lists”. Michael was completely in charge and led us through the evening with many laughs. We learned how many weird lists are up on the internet. Check out the “List of lists of lists” and you will get a feeling for what I mean. I learned that every single one of our members is drawing up lists, some of them are going about it extremely efficiently. We had 4 inspiring table topics and then we were hanging on Steve’s lips when he gave his very moving speech “Buddy Boy”. As Michael returned to the lectern he told us he got goose bumps and I certainly felt the same.

How to give constructive Feedback?

Morag gave us an educational on how to evaluate a speech at Toastmasters. As an evaluator you should be specific, honest, yet encouraging and avoid at all costs being disingenious. She told us exactly how to go about it when you are the evaluator and what to do Before, During and After the speech.

Since we have an Evaluation Contest coming up on February 26th this was an extremely good preparation.

After this we got down to brass tacks using our new skills on Neel who was the evaluator of Steve’s speech. We gave him feedback regarding his feedback. 🙂

Bamberg Toastmasters is the only Toastmasters club (dare I say it) in the world ??? – I am not so sure about that, so let’s say certainly within Bavaria, where we have the role of “Cakemaster” at every meeting. The member who signs up as the Cakemaster brings a cake for our socialising part after the meeting. We all stay on to have a cup of tea together and a good long chat.

This is when mentors speak to their mentees, additional feedback is given, plans are hatched, encouragement is given, new speech topics are discovered and we also get to know each other. Last night, we had a delicious cake by Yanti: Bet you wish you could’ve been there. (see pic on the right)

Well, if you’ve missed it, just come to our next meeting on February 12th. We are planning a very special event. It’s carneval and we will do everything backwards.